We Love Our Dogs! 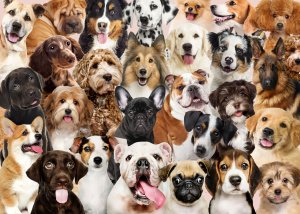 We love our pups and we’d do anything for them. Dogs are always happy to see you, whether you’ve been at work all day or you’ve just walked out of the house to get the mail. Dogs greet you with the same enthusiasm almost every time. Besides being man’s best friend, they are also very smart and interesting animals. Here are some fun facts about our pups:

·       The Labrador Retriever has been on The AKC’s most popular breed list for 30 consecutive years—longer than any other breed.

·       A dog’s sense of smell is legendary, but did you know that his nose has as many as 300 million receptors? In comparison, a human nose has about 5 million.

·       Dogs’ noses can sense heat/thermal radiation, which explains why blind or deaf dogs can still hunt.

·       Only one breed that was among the five most popular breeds in 1934, the Beagle— still remains in the top five today.

·       Yawning is contagious even for dogs. Research shows that the sound of a human yawn can trigger one from your dog. And it’s four times as likely to happen when it’s the yawn of a person he knows.

·       Dogs curl up in a ball when sleeping to protect their organs—a hold over from their days in the wild, when they were vulnerable to predator attacks.

·       The Basenji is not technically “barkless,” as many people think. They can yodel.

·       The Australian Shepherd is not actually from Australia—they are an American breed.

·       The Labrador Retriever is originally from Newfoundland.

·       Human blood pressure goes down when petting a dog. And so does the dog’s.

·       Dalmatians are born completely white, and develop their spots as they get older.

·       When dogs kick backwards after they go to the bathroom it’s not to cover it up, but to mark their territory, using the scent glands in their feet.

·       A recent study shows that dogs are among a small group of animals who show voluntary unselfish kindness to others without any reward. This is one fact dog lovers have known all along.

·       The Bloodhound’s sense of smell is so accurate that the results of its tracking can be used as evidence in a court of law.

·       Some dogs are taller or heavier, but according to the Guinness World Records, A Mastiff named Zorba is the world’s overall largest dog ever. Zorba weighed 343 pounds and measured over eight feet from his nose to his tail. He’s been described as being about the size of a small donkey.

·       According to The Guinness World Records, the smallest dog ever recorded was Miracle Milly, a Chihuahua. Born in 2011, Milly was a miniscule 3.8 inches tall and weighed in at one pound.