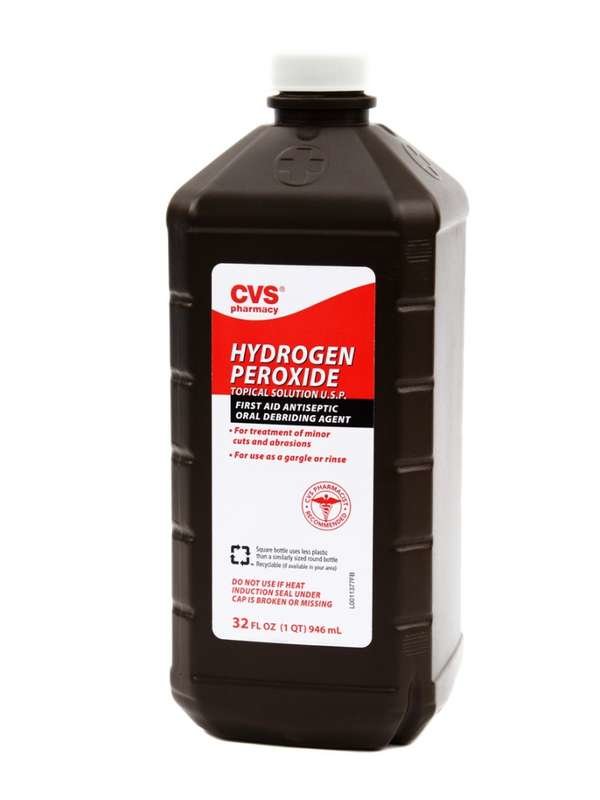 As you may remember from chemistry class, hydrogen peroxide is water with an extra oxygen atom—hence the chemical distinction H₂O₂. While no longer recommended as a wound disinfectant (because it slows healing time), hydrogen peroxide has potent antibacterial, antiviral, antifungal, and bleaching properties. In its common three percent solution, it’s strong enough to cut through most organic stains and mild rust! Using it will save you time and money on commercial cleaners while posing no hazard to your health and the environment, so read on to discover a dozen dynamite uses for nature’s best all-purpose cleaner.

Here are some surprising household uses:

For a potent homemade grout and tile cleaner, mix ½ cup of baking soda with ¼ cup of hydrogen peroxide in a sealable container. Add a teaspoon of liquid dish soap, close the lid, and shake until fully combined. Wearing protective gloves, apply to tile and grout, let sit for at least five minutes, then rinse clean with water.

Brighten up your bathtub

Mold and grime in the shower and tub are gross! But many commercial tub and tile cleaners include such chemicals as bleach, ammonia, and artificial fragrances that can be harmful to respiratory health, caustic to skin, and generally bad for the environment. For a safer solution, make a paste of 2/3 baking soda to 1/3 hydrogen peroxide. Apply to tub and shower area, wait for 30 minutes, then rinse. Follow with a spritz of half-and-half vinegar and water solution to dissolve any residue and soap scum.

Get rid of rust

While hydrogen peroxide can speed the rusting process, it can also remove rust if you follow these easy steps. In a bowl, place equal parts cream of tartar (a mild powdery acid used in baking and available at grocery stores) and baking soda. Add a few drops of hydrogen peroxide, just enough to form a paste. Rub paste onto rusty objects, wait an hour, then wash with water.

Give your plants a treat

For houseplants, mix one tablespoon of three percent hydrogen peroxide and one cup of water in a spray bottle and soak the soil with the solution once or twice a week (making soil dries out completely before a second treatment). You should see improvement of root rot after one to two treatments, while pests should lessen their destructive activities within a week.

Get rid of skunk stink

Had a run-in with a stinky varmint? Hydrogen peroxide to the rescue! To deodorize clothing, mix one part three percent hydrogen peroxide with six parts water (don’t go any stronger, as hydrogen peroxide can damage textile fibers). Soak your clothing in this solution for an hour or two, rinse thoroughly with cold water, then wash in your machine on a cold setting. If a skunk has sprayed you or your pet, combine a quart of three percent hydrogen peroxide, half a cup of baking soda, and a teaspoon of dishwashing detergent. Using a rag, rub yourself or your pet down (avoiding eyes and sensitive areas). When the odor lessens, rinse with clean water, preferably outside, to remove as much of the mixture and odor as possible before entering your home again.